The year eight students have visited Bletchley Park this term to find out about the code breakers during the second world war. The first half of the year group visited on September 15, and the second half on October 5. Both groups were able to explore the huts where Turing and his team worked, the Bletchley Park mansion which became offices when it was acquired by the military, as well as have a workshop looking at      e-safety as well as having a try at breaking a series of codes themselves!

Matthew in 8E tells us about his trip...

On Friday 15th September, we went to Bletchley Park. I was excited about learning about the place where some of the most secret and important events happened during World War 2.

The highlight of my day was definitely seeing the rebuild of the Bombe machine working. This is the recreation of the machine that first cracked the German Enigma code in the Second World War. The machine was taller than a fully-grown adult and very thick. On one side dials were turning, trying every single combination. The other side was a tangle of wires, which was the brain of the beast. Before the Bombe they would get lots of people to try all of the combinations that there could be.

Alan Turing was the inventor of the Bombe machine. He was a code breaker and with his machine, he saved many lives and took approximately two years off the war, as they could find out what the enemy was doing. 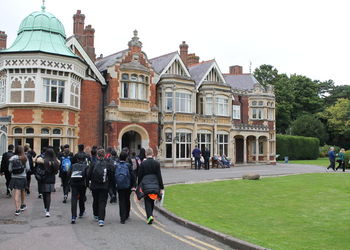 The Enigma machine was a German machine with 3-5 cogs. The ones carried by troops had 3 cogs. These alone had 15,000,000,000,000,000,000 combinations and the coded messages were hard to crack. They had a chart that showed what combination to use each day. However, the Germans didn’t change it, even when they should have, so it was easy to crack the code.

Most of the code breaking helped the shipping convoys that carried our food avoid the German U-boat submarines. It would have helped land forces as well. 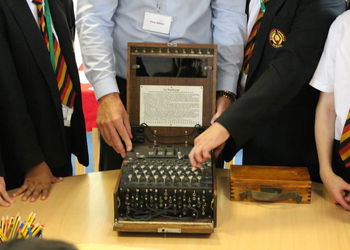 The mansion of Bletchley Parkwas where the office was where those who worked on site would first come once they had been told their war work would be carried out at Bletchley Park. The office was where the code breakers would sign a secrecy document promising to say nothing about their work. The mansion is now a museum and showed us what life was like in Bletchley during the war. The Huts were where the actual code breaking took place and were hot in the summer and cold in the winter. Hut 8 was where Alan Turing worked the most, but not all of the time. When the workers weren’t code breaking, in the winter they would skate on the lake and keep warm. Unfortunately, in the Huts, it got very cold, as they did not have central heating.

To work at Bletchley it must have been hard and tiring as it was a full day of work. It must have also been lonely, as you could not tell anyone about your work, not even your family, and depressing if you worked really hard and could not crack the code. However, it must have been comforting to think you were saving lives and it was important.

I had a great day at Bletchley Park and I was amazed at all of the secrets it held. 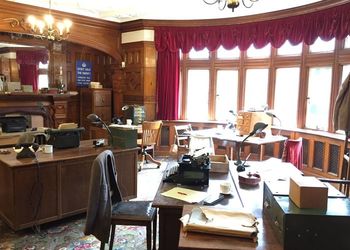