This September, Year 7's were set the task in their houses to design a House Postcard. Students had to design a postcard to represent their House achievements throughout the academic year.

Well done to Oliver, Jessica, Antrix & Cameron for their incredible designs for Ali, King, Roosevelt & Winton. The winning designs can be seen below along with information about their houses and messages from the pastoral team : 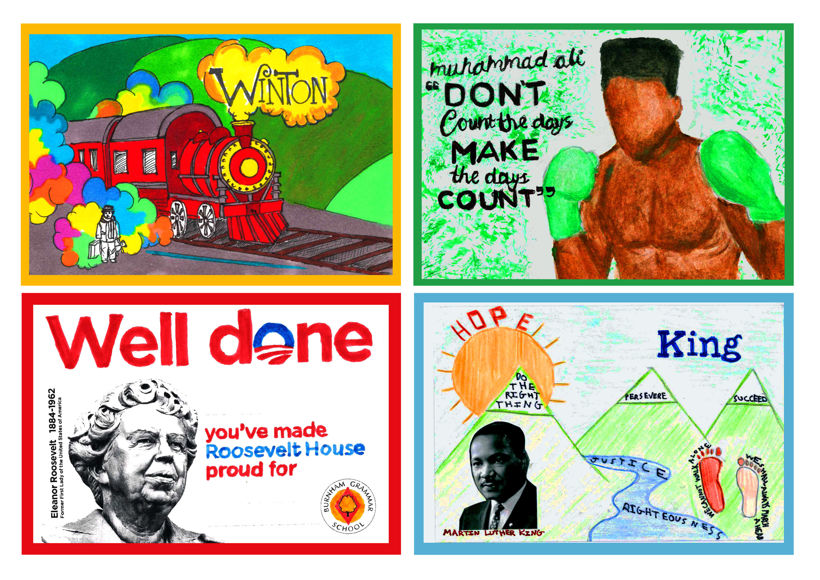 Ali House is named after Muhammad Ali  (born Cassius Marcellus Clay Jr.). He was an American professional boxer, activist, and philanthropist. Nicknamed "The Greatest", he is widely regarded as one of the most significant and celebrated figures of the 20th century and as one of the greatest boxers of all time.

The winning design was from Jessica in 7C. A superb effort , She thought the quote was very fitting during the current pandemic and we agree. Well done!

King House is named after Martin Luther King Jr who was a key figure in the civil rights movement in America, speaking out against injustice and discrimination up until his assassination in 1968.  He is most remembered for his "I have a dream" speech and his powerful legacy still lives on today through #BlackLivesMatter.

The winning design for King House was created by Cameron in 7D , who has strikingly depicted the key messages that we strive to instil in our students every day. Well done Cameron!

Roosevelt House is named after Eleanor Roosevelt, the wife and first lady to President Franklin D. Roosevelt (1933-1945).  She pioneered the role of the First Lady in many ways by getting involved in many issues such as Women's liberation, the civil rights of ethnic minorities and oversaw the drafting of the Universal Declaration of Human Rights.  There are many more things that she accomplished beyond this as well and her influence is still felt today through many activists, politicians and people in public life.

The winner of the competition was Antrix in 7A , who has created this striking card which conveys who the house is named after and clearly shows the "well done" message that the card is intending to reflect.

Winton House is named after Sir Nicholas Winton, who was a British humanitarian (from Maidenhead) who established an organisation to rescue children at risk from Nazi Germany during World War II. In the end he saved 669 refugee children from all over Europe and fund raised and found them homes in Britain.

The winning design was Oliver in 7B, who has creatively captured the caring act of Nicholas Winton into his winning postcard design. His attention to detail and the vibrant colours used are brilliant! Well done Oliver!

Well done to all the winning students - they have all received a winning amazon voucher!